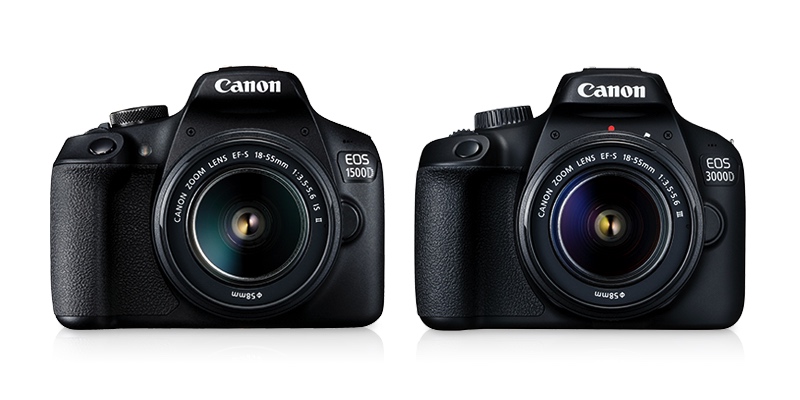 Canon India has announced the launch of two new DSLR cameras, Canon EOS 1500D and Canon EOS 3000D. The Canon EOS 3000D is a beginner camera which is said to replace the outgoing EOS 1300D.The cameras also come with filter effects such as soft focus, toy camera, fish-eye, miniature, and an “artsy grainy” black-and-white. The cameras are aimed at casual users and beginners who are willing to get into the DSLR camera photography.

The company had yesterday launched the Canon EOS M50 mirrorless camera with the price of Rs. 61995.

The EOS 1500D from Canon boasts a 24.1 MP APS-C size CMOS sensor. The camera can shoot videos up to 1080p 30 fps with a bit rate of 46 Mbps. The DIGIC 4+ image processor underneath helps the camera to capture 24MP high resolution picture and 3fps burst shots. It has 9-point AutoFocus with 1 centre cross-type AF point, while all the AF points support f/5.6. The camera has a standard ISO range of 100-6400 which can be expanded to “H” which is equivalent to ISO 12,800. The camera has Canon EF lens mount and should support all the canon lenses excluding the EF-M lenses. The camera also supports shooting pictures in RAW and JPEG simultaneously.

To record the media, the Canon EOS 1500D comes with a SD card slot, which can accept, SD memory card, SDHC memory card, SDXC memory cards. The camera comes with 3.0” LCD display with 7 levels of brightness adjustment. The battery is said to last up to 500 shots using the view finder, whereas the videos can be shot for approximately 1hr 30 mins. The weight of the camera body (without lens, battery & SD card), is around 427 gms. For connectivity, the EOS 1500D supports Wi-Fi/NFC sharing through the Camera Connect App on your smartphones.

The Canon EOS 3000D has an 18 MP APS-C size CMOS sensor. The camera has a DIGIC 4+ image processor that can quickly process & produce high quality images. Just like the 1500D, the Canon 3000D can shoot videos at 1080p 30fps at 46 Mbps bit rate, and a maximum of 3fps burst shots. The camera has a 9-point AF system with all the AF points supporting f/5.6 aperture. The camera has an ISO range of 100-6400 (expandable up to 12,800). The camera is compatible with Canon EF lenses including the ef-s lenses but it isn’t compatible with EF-M lenses. The camera also supports shooting pictures in RAW and JPEG simultaneously.

The EOS 3000D can accept SD/SDHC/SDXC memory cards. The camera comes with a 2.7 inch TFT LCD display with 7 levels of brightness adjustment. A fully charge LP-E10 battery pack is said to last up to 500 shots using the view finder, whereas the videos can be shot for approximately 1hr 15 mins. The 1500D supports Wi-Fi and NFC sharing to your smartphones using the Camera Connect App. The body alone weighs just 389 gms.