Samsung has finally announced their new Samsung Galaxy S9 and the S9+ at the Unpacked event today. The device is a major upgrade over the predecessor in terms of specifications, software and the overall experience. A lot of things have changed over the year and the company has adapted to the changes to make the S9 one of the best smartphones in the market. Given below are some of the best features that you can find on the Samsung Galaxy S9 or the S9+ 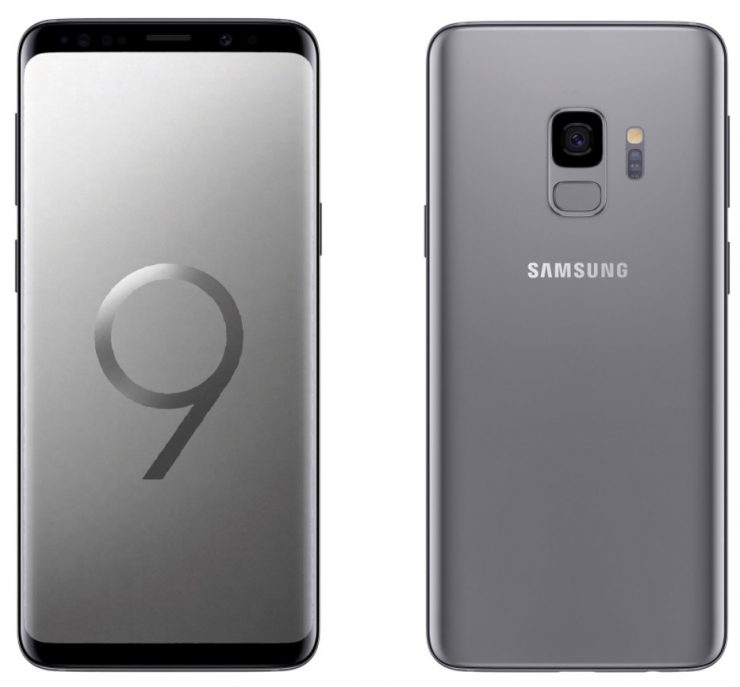 This is the biggest change in the Smartphone in the recent past, the Samsung Galaxy S9 comes with a completely reimagined camera with a variable aperture lens for the primary camera. The S9 comes with a 12MP camera that can toggle between F/1.5 and F/2.4 aperture letting you take excellent shots in both low light as well as well-lit conditions. The company has also chosen to include a dual camera setup in the S9+ one of which is the aforementioned dual aperture camera while the secondary camera is the 12MP F/2.4 aperture camera. This change in the camera helps the device capture a much better image with lesser noise and disturbances. The Multi Window on the device has been updated to provide a better experience. The Multi Windows lets you split the device into separate apps and you can also change the size of the apps windows according to the requirement. This can be very handy while using two different apps and continuously toggling between them. The improved processor will help make this feature even better by reducing the delays and making the multi-window more efficient. Samsung Dex is the desktop solution by the company that lets you plug in your phone to the Samsung Dex docking station which can then be connected to a display. This totally changes the user experience and you get a more desktop experience from the device thereby increasing the convenience in certain use cases. This lets you convert your smartphone into a full-fledged desktop solution with resizable windows and a mouse friendly user experience. This can be extremely helpful while giving presentations and navigating through the operating system on a bigger display. Connecting the S9 to the Samsung Dex gives you drag and drop capability along with contextual menus, you can also use your smartphone as the touchpad or a keyboard when your device is connected to the Dex docking station. 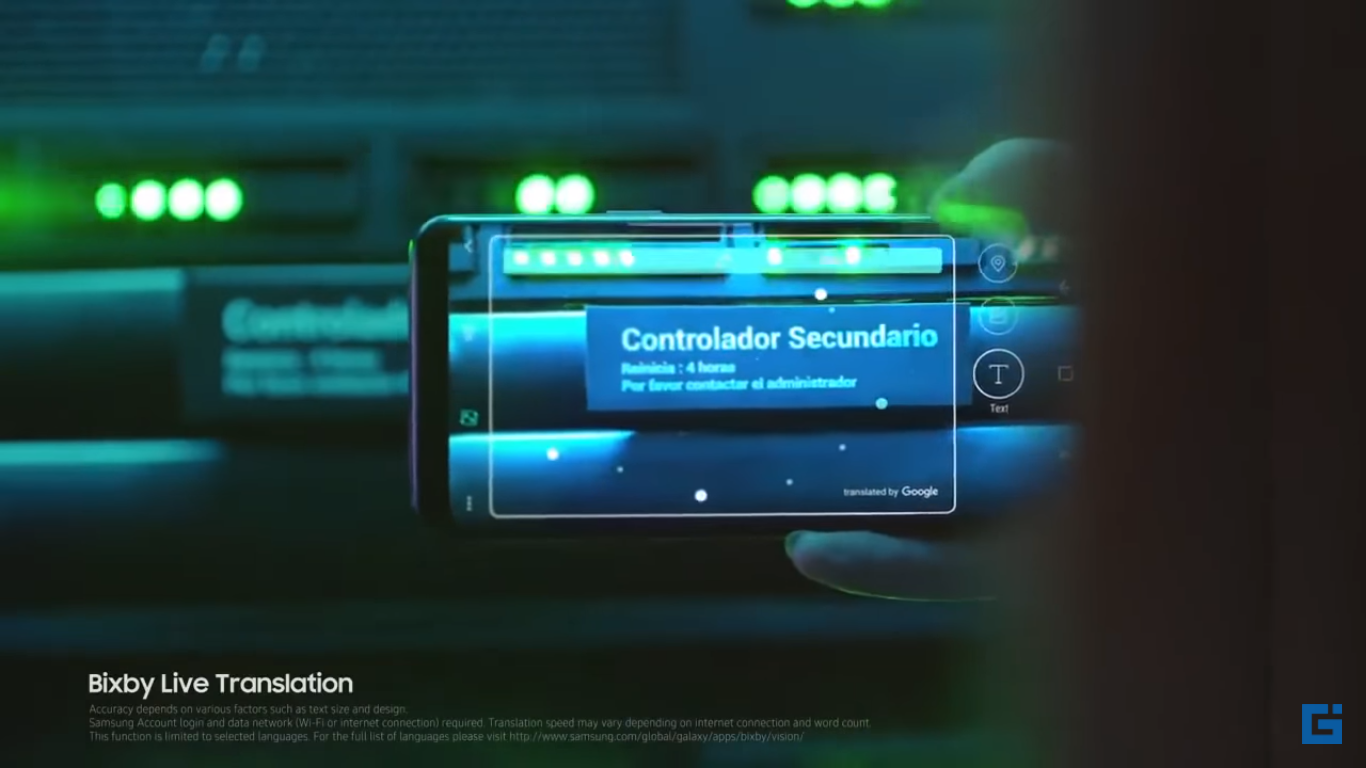 Bixby Live Translation is the latest addition to the Bixby assistant that was first seen on the Samsung S8. This feature lets you use your camera for live text translations. Once the feature is enabled you just need to focus the camera on the text that is in the foreign language and Bixby Live Translation feature will automatically recognize the foreign text and translate it to the language of your choice in real time. This feature was previously seen in the Google Goggles app which could take image input and then translate, but the feature was very sketchy and not real time. Bixby Live Translation can be used across all supported languages for instant real-time translation. 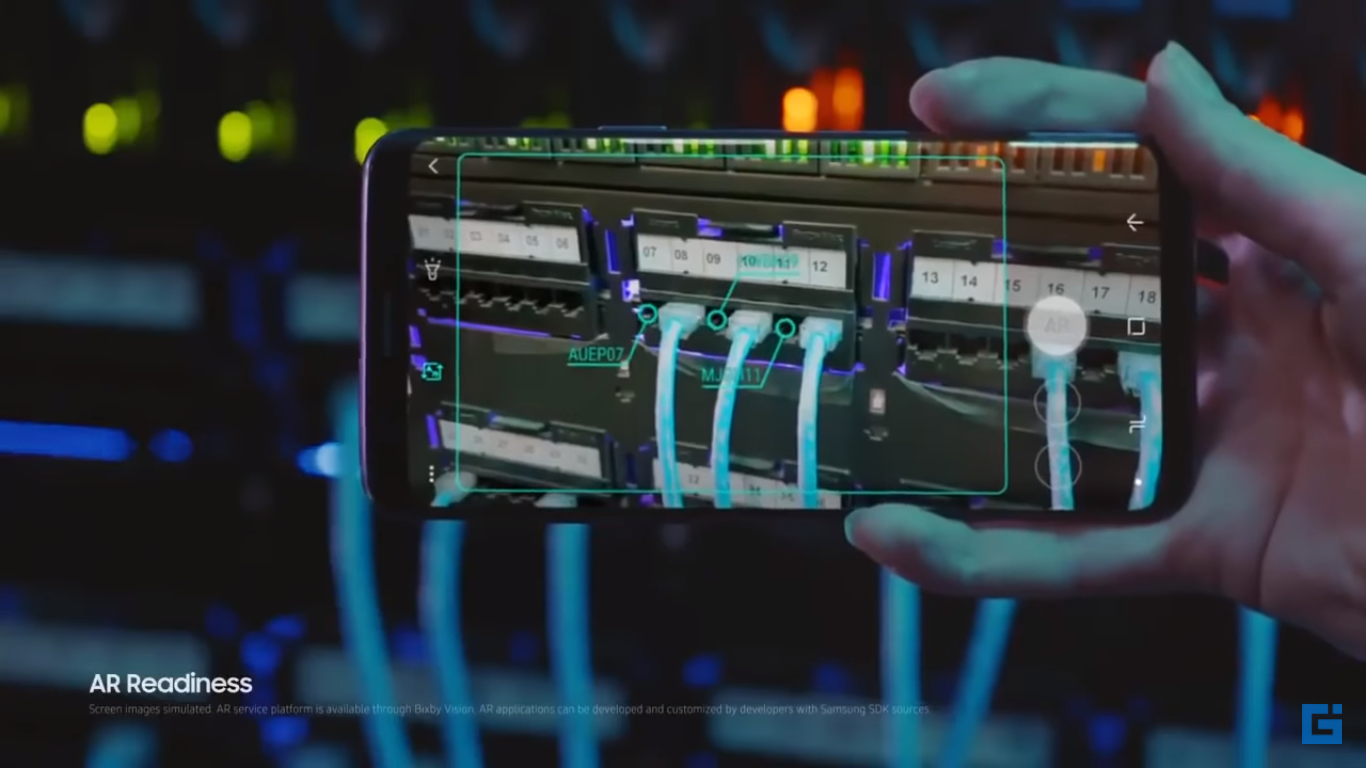 The Samsung Galaxy S9 and the S9+ have been built with AR in mind, the software has been designed to enable developers to make use of the core AR features and develop apps based on it. The launch video shows a demo where the AR implementation helps identify the network cables in a data center which is one of the endless possibilities with AR. Now that the S9 comes with native AR support and better integration, a plethora of AR-based apps compatible with the AR core of the S9 is expected to storm the Play Store. We’ve seen App Pairing before on devices such as the Samsung Galaxy S8 and the Galaxy Note 8. App Pairs help you select two apps and create a shortcut to launch both of them together in a split window. This is very helpful as you can open two apps of your choice with the click of a button without having to toggle between the Multi Window feature. App Pairing has been improved in the Samsung Galaxy S9 to offer better functionality and improved usability over the predecessors. We’ve seen Samsung Devices come with an IP rating ever since the Samsung Galaxy S5 and it has become a necessity now. The Samsung Galaxy S9 comes with an improved IP68 rating which gives you more freedom to expose the device to more dire conditions than ever possible. The IP68 Rating guarantees usability and are deemed fit enough to withstand dust, dirt, and sand, and are resistant to submersion up to a maximum depth of 1.5m underwater for up to thirty minutes. The Samsung Knox is a security setup that we’ve seen on the previous phones ever since the Samsung Galaxy S6. The Knox 3.1 comes with improved security and more reliability and also several new additions. The Samsung Knox has been built with hardware integration to enable enhanced multi-layered security. The enhanced security allows you to separate personal and professional data with your biometrics and your data stays safe all the time even if your phone is lost.

There is also Samsung Knox Enterprise edition which provides an additional layer of security and gives control to the IT team of the enterprise to control and issue FOTA updates. The device is easy to configure and manage and has been designed to integrate with all your existing devices. Enterprise Edition also supports extended warranties, Maintenance support, Product guarantees and security updates for up to four years. The enterprise edition is the comprehensive package that competes a phone designed for business these days.