Huawei has unveiled its latest smartphone under the Honor branding, and it isn’t just another smartphone in one of its ongoing lineups, but a different take. A curvy, beautiful, glassy body under the name “Magic”. Externally, everything is smooth and curvy as a pebble, and internally, the phone is quite strong. Let’s talk about it.

The Honor Magic on the front has as 5.09-inch AMOLED display with a Quad HD resolution (2560 x 1440 pixels) and that gives it a pixel density of about 577 PPI. Layered over it is a curved glass that goes down covering over half of the frame on every side. It is about 7.8mm in thickness, which might not bring it in the list of the sleekest of the devices, but take a look at the phone and you should forget about the thickness.

Under the hood is Kirin 950 chipset, an octa-core one and it is supported by 4GB of RAM and 64GB of internal storage, which is quite common a combination offered by Huawei, the company that has recently overlooked every chipset provider and has been using its own range, which is said to offer a decent performance. The camera combination is another sweet deal, with a rear Dual-camera combination here (12-megapixel f/2.2 dual-lens camera) and that is the one similar to the ones offered in Huawei P9 and Honor 8 (one color and one monochrome sensor), and on the front having an 8-megapixel f/2.4 camera. 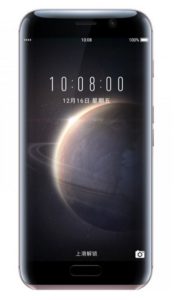 The Honor Magic runs Honor Magic Live OS that is based on Android 6.0 Marshmallow and part of the UI is the DeepThink, a digital assistant that works along with FaceCode, which takes advantage of the infrared camera to recognize users’ eyes only so that the users and known trusted people can view the notifications. For the enhanced security, the home key works as a fingerprint scanner.

Another special with the Honor Magic is the Magic Power charger, which helps get to 90% of the phone charge in just 30 minutes. The company also claims that about 40% of charge is reached in 10 minutes, and 70% in 20 minutes and the phone does not get heated while charging this fast. This is a Dual SIM phone with the first slot supporting 4G SIM card and the second one supporting 2G SIM.

There is a lot more included in the user interface that is exclusive to the Magic phone, and this concept phone is available for pre-order in China with the estimated delivery date of December 25th. The pricing is set at CNY 3700, which is about Rs. 36000.