OPPO India, just like Vivo India, is known to come with phones that usually are not exceptional for the price asked, but these phones are backed by an excellent after-sales service, a UI that users don’t frown upon, and there is enough being offered in the limited number of phones that are launched during the entire year. The newest phone from OPPO is the OPPO F7, a smartphone that tries to have everything that is trending currently, including the notch on the top of the display, but it also misses out on a few things, including the dual-lens rear camera setup that was made to look pointless by the likes of Pixel 2, but having it would’ve just been another good addition to the list of good specs.

There’s some things that match with the major rival, the Vivo V9 but the phone keeps itself ahead in a few areas.

How good is the smartphone in the real-life scenario, far from the specs on paper? Let’s find out in the review.

The unit that I have used to review is the 4GB RAM one that has 64GB storage and the Solar Red variant is what we’ve got to use.

The red here glitters and shines, thanks to the glossy back contributed by the sheet of glass over the aluminum plating. The design here cannot be called unique in any sense but it isn’t bad at all. The phone weighs 158 grams but given the size and dimensions, it doesn’t feel a lot heavy. The fingerprint sensor located on the back has a different color and it stands out, and the placement of it as well is apt for the finger to easily sit there for the recognition and unlocking. The bottom of the phone houses the MicroUSB port (yes, there’s still no USB Type-C), a microphone, the speaker grill, and the headset jack. The power button and the volume rocker buttons sit on the right and left side of the phone respectively, and the tray on the right has three slots, which is common for the OPPO phones as they offer a dedicated MicroSD card slot for the storage expansion. 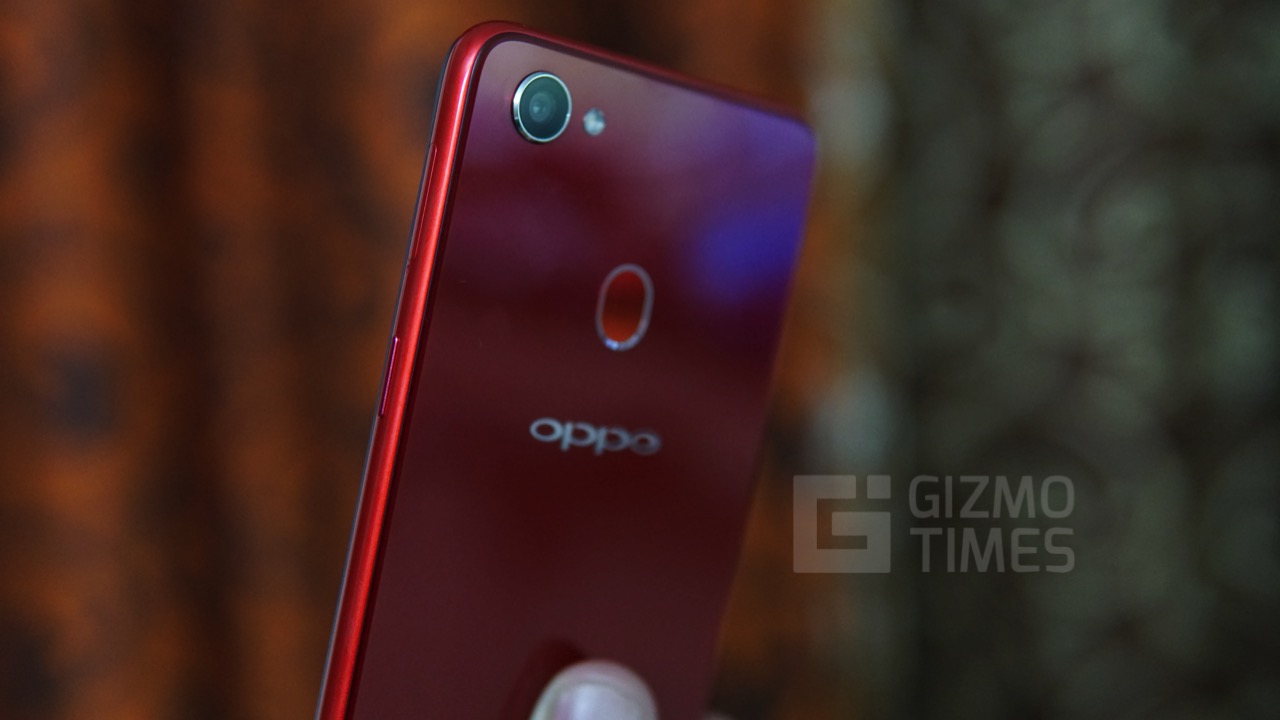 Overall, the OPPO F7 is quite comfortable to hold and use, and OPPO doesn’t really like to experiment with the design, as was the case with the previous phones from the company, including the OPPO F5. Though, the change in the design is a major one as the previous device had a metal backplate and not a glossy back.

What’s interesting here from OPPO is that display on the front. The F5 last year had the 18:9 display that was tall and took most of the front of the device, but after the iPhone X was official, many brands have taken the same approach, having a notch on the top to house the camera, earpiece, and the sensors, while giving access to the display on either side of it. What’s good here is that the OPPO F7 has a good display, keeping aside whatever the talk about whether it copied some other phone’s idea.

This tall 19:9 display will still have that issue of offering an easy single-hand usage, but you cannot expect both of the best in a single phone – more screen estate, and a single hand usage. Under the display settings, you can adjust the color temperature, and there is also the Night Shield that helps reduce the blue light from the screen. Talking about the usage, let’s check out the interface. OPPO and Vivo both have decided to work on the latest available version of Android and fine tune their UI based on that. The OPPO F7 here runs Android 8.1 Oreo-based ColorOS 5.0, which is iOS-esque but it has always been like that. The home screens are the ones having widgets and apps, as you don’t find any separate app drawer here.

The ColorOS UI last year had the Control Center from the bottom to have all the quick settings, but that is vanished here to show those quick settings in the notification panel itself when you drag it down. It’d have been better to see it available from the bottom of the screen because the tall screen makes it hard to reach all these settings with the same hand. Swiping right from the home screen takes you to the Smart Assistant, which is not the one from Google but something that OPPO has worked on, with quick functions, weather info, steps tracking, events, and a set of favorite contacts. One issue with the new aspect ratio is that not every app is able to scale up to that and it sticks to the regular 16:9 or the recent 18:9 one, but the OPPO F7 has the “App Display in Full-screen” setting where the apps that are not optimized for full screen will be scaled and stretched. This might result in some apps not functioning properly but that didn’t happen for the apps that I tried, including games like Riptide GP2.

The interface has quite a lot of gesture options and settings for a better user experience. There’s also that App Split-screen mode that helps take advantage of the tall display to break it down into two parts and use two apps at the same time.

The obsession of MediaTek from OPPO is clear as the company still chose to go with one of MediaTek’s chipsets, but is it a bad one when it comes to the performance? The Helio P60 is an octa-core chipset and it gets the graphics support from the ARM Mali-G72 MP3 GPU. While it doesn’t make sense in comparing with a chipset from a better-known chipset maker Qualcomm, it is what would give an idea about the prowess of Helio P60. The speed test comparison we did with the Xiaomi Redmi Note 5 Pro cleared it out that the chipset here is even faster and better than the Snapdragon 636.

Now, coming to the performance and the responsiveness of the interface. For the two weeks that I have been using the OPPO F7, there was never any lag or any slowing down of the device. The UI is snappy and responsive and that’s the case even with the gaming. Thankfully, the phone has the Game Acceleration mode as well that optimizes the display configuration to fully utilize the hardware resources. We’ve seen all good so far but it is the cameras where one would miss the bokeh captures if that’s something you have got used to from any other phone. The cameras are not bad otherwise, because when compared to the Vivo V9, the photos have been better with a good low-light performance as well. Although some might argue that there is no need for a dual-lens camera setup to take good photos with background blur, that argument doesn’t feel right here because although the OPPO F7 has a portrait mode, it doesn’t do anything so well in marking out the borders of the object and blurring the background and it seems too artificial for a blur that is set in the picture. There’s more to the selfie camera than it is on the rear camera. The OPPO F7 has a 25-megapixel front-facing camera is a killer good one, offering great control to the users, on not just the focus and exposure but a lot more. In fact, the bokeh that you see here looks natural and better, but that’s expected because in portraits, the face is what is focused and the AI here understands the contour and blurs everything else but the face in the selfie.

Another disappointment with the camera is that the video capture is possible up to 1080p and you cannot take 4K videos. At this point in time when other mid-range phones are capable of capturing 4K videos, it should have been a feature in this device as well.

A 3400 mAh battery powers the phone and it is good enough to give a day’s battery life. For those who don’t have their eyes on the screen for long, the phone can easily take you through to the next day without needing for a charge, but it comfortably gives you over four hours of screen-on time during the day’s usage.

The F7 has a slew of connectivity options, including the VoLTE support. Though, it’d have been good to see NFC under the list of available options, but that’s absent here. The pace at which the switching between networks and latching onto the mobile networks happen is good, and the phones from OPPO are known to have no hassles when it comes to the basics.

Final Verdict – How good is the OPPO F7?

The OPPO F7 has everything that one would need for a good user experience, but those things like the dual-lens camera not being present is something one would find hard to ignore. The F7 offers excellent performance, a great camera performance, and the battery life is good as well.

For the price of Rs. 21999, you might be able to look at several other phones including the Xiaomi Redmi Note 5 Pro, Honor 9i, as well as the Vivo V9, but each of them have their odds and goods, and it boils down to what you are expecting from the phone for your usage.