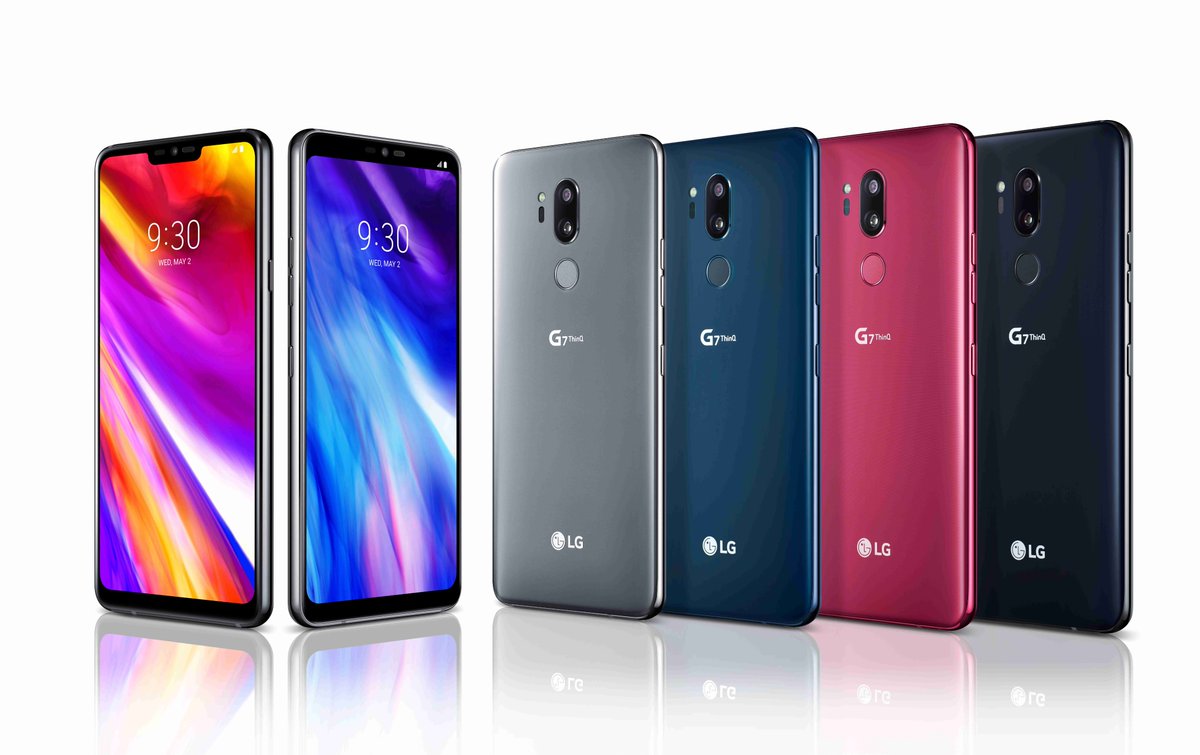 After multiple leaks, LG has finally launched its flagship smartphone for 2018, the LG G7 ThinQ, today. The new phone is LG’s first smartphone to come with a notched display on the front, along with a vertically mounted dual camera setup on the back.

The phone comes with LG’s AI technology called the ThinQ, hence the name G7 ThinQ. The company calls the notched screen as the “new second screen”, a technology that was once predominantly used in their V-series for 2 entire generations, before LG themselves gave up.

The LG G7 ThinQ sports a weird 19.5:9 IPS LCD display spread across 6.1 inches. The display uses a new M+ panel that has an RGBW pixel arrangement, allowing the screen to provide 1000 nits of maximum brightness and an improved contrast. The notched Full Vision display has a 3120x1440p resolution that is protected under Gorilla Glass 5 from Corning. Additionally, the display also covers 100% DCI-P3 color gamut and is HDR 10 & Dolby Vision ready.

The G7 is powered by the latest beefy Snapdragon 845 processor, while the graphics are handled by the Adreno 630 GPU. The phone comes in either 4 GB RAM/ 64 GB storage or 6 GB RAM/ 128 GB of internal storage variants, with an option to expand the storage up to 400 GB using a microSD card. The phone runs on LG’s AI Pack 2.0 based on Android 8.0 Oreo out of the box, with a promise to deliver the Android P update once Google releases the final version.

The cameras on the G7 are where we get to witness LG’s AI prowess. The phone packs in a dual 16 MP cameras with one having a 71° wide lens with an F/1.6 aperture and the other sporting a super wide 107° lens and an F/1.9 aperture. The normal 16 MP sensor does come with OIS, while the super wide angle camera lacks OIS. The cameras are assisted by both Phase detection & Laser AutoFocus and an LED flash at the back. To the front, we get an 8 MP F/1.9 shooter for selfies that is housed in the notch.

The rear camera can record videos up to a maximum of 2160p 4K HDR videos, along with 24-bit/192 kHz stereo sound recording, whereas the front camera is capped at 1080p. The camera’s AI tech can determine various scenes such as trees, sky, pets, human & many more and set the mode accordingly.

The LG G7 now comes with a separate power/lock button, differing from its predecessors, which had the power button embedded underneath fingerprint scanner, on the back. For connectivity, the phone comes with 802.11ac dual-band Wi-Fi, Bluetooth 5.0 with aptX HD, A-GPS, GLONASS, BDS and a USB 3.1 Type C port that supports USB OTG function. The phone also comes with a dedicated Google Assistant button on the left.

The battery underneath the Glass-Aluminum-Glass sandwich is a 3000 mAh unit with support for Quick Charge 3.0. The phone can be charged wirelessly as well and supports WPC and PMA standards, but it is limited to the US variant only. The phone also comes with Qnovo battery tech that is supposed to help the battery sustain its capacity over the years. For added endurance and resilience, the phone is IP68 dust and water certified, along with MIL-STD-810G certification.

LG keeps its promise of delivering high quality audio listening to its users, by carrying forward the 32-bit/192 kHz quad-DAC equipped 3.5mm headphone jack to the G7. The phone also comes with a bigger and louder bottom firing speaker than the G6, that uses a resonant chamber to get up to 10 times louder sound, as the complains claims. There’s also support for DTS-X sound.

The LG G7 ThinQ comes in New Platinum Gray, New Aurora Black, New Moroccan Blue and Raspberry Red colors. The pricing and availability of the phone are not yet announced.

Honor 10 Specs, India Launch Details - What do we know so far