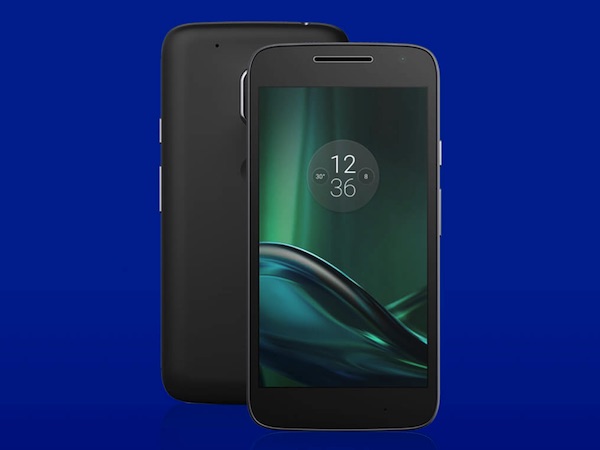 Motorola India has launched the Play variant of the Moto G4 smartphone, the Moto G4 Play that will go on sale from today on Amazon India, with the set price of Rs. 8999. The device isn’t as power-packed as the other two devices in the series are, but that is the reason why Motorola has priced it quite lesser than the two.

The Moto G4 Play comes with a 5-inch HD display (1280 x 720 pixels resolution) and under the hood is the Qualcomm Snapdragon 410 quad-core processor clocking at 1.2GHz and there’s Adreno 306 GPU and 2GB of RAM supporting it. While there’s 16GB storage onboard, the device comes with a MicroSD card slot offering storage expansion by about 128GB.

The cameras are quite downgraded and could pose as a disappointment because what we see here is an 8-megapixel rear camera and a 5-megapixel front-facing camera. The phone runs Android 6.0.1 Marshmallow OS and it is the usual Moto flavor with no big changes from the stock Android but some important apps added into the list. The Moto G4 Play has a 2800 mAh battery and one of the good features of it is the fast charging capability – a 10W rapid charger is included in the box and it helps getting about 5 hours of battery life in just 15 minutes of charge.

As for the connectivity, there is support for 4G LTE, Wi-Fi 802.11 b/g/n, Bluetooth 4.1 LE, and GPS. The phone isn’t water resistant, but the company mentions that there is an advanced nano-coating technology that creates a water repellent barrier to protect against moderate exposure of water, though the water ingress protection is not guaranteed here.

There will be Black and White color options available for the Moto G4 Play, and the device is priced at Rs. 8999, with the availability from 10 p.m. on September 6th. There are a few offers bundled for the buyers, including a Rs. 15000 Yatra eCash, Rs. 100 off on Bookmyshow, 80% off on Kindle eBooks for up to Rs. 500, Additional 5% off on HDFC debit cards, Rs. 300 cashback of purchase of Motorola Pulse 2 headphones, and if you purchase the device on Amazon app, you stand a chance to win 100% cashback.