ASUS India has officially launched the ROG Phone in India. The smartphone is the first under the “Republic of Gamers” branding that has been famous for its PC and laptop offerings. The ROG Phone brings about a lot of features and inclusions that are suited for mobile gamers who do more than just playing high-end games on smartphones.

The ROG Phone comes with the 6-inch 18:9 Super AMOLED display and since it is aimed towards gaming, there is 90Hz refresh rate and 1ms pixel response time. The display is protected by the Gorilla Glass 6 protection. Internally, the phone is powered by the Qualcomm Snapdragon 845 processor with the CPU speed-binned to 2.96 GHz. The version launching in India has 8GB of RAM and 128GB of storage, with no option to expand the storage. The phone is IPX4 splash resistant.

The phone is designed for gamers, so while it has a glass back, that is over a metal heatsink plate. The back is also protected by the 3D Corning Gorilla Glass 5 and the phone has IP X4 rating for the water splash-proofing. Before we talk about the gaming enhancements, let’s talk about the cameras. The ASUS ROG Phone has a dual-lens camera combination on the back with the primary sensor being the 12MP IMX 363 sensor that has the F/1.7 aperture and 1.4um pixel size, dual-pixel autofocus, RGB color correction sensor, and the support of Optical Image Stabilization. The secondary sensor on the back of the phone is an 8MP one offering a 120-degree wide-angle lens. On the front is an 8MP camera used for selfies and video calls. 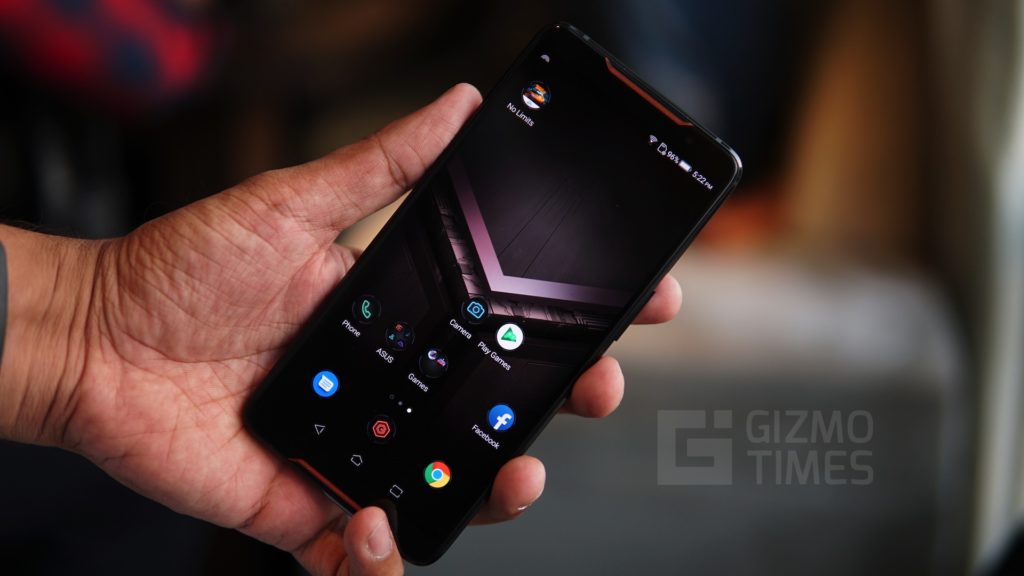 The interesting part about the ROG phone is its gaming. There are a couple of games that are pre-installed here – Freefire and Asphalt 9. For gamers who want to take advantage of the side panel of the phone, there are three areas that have ultrasonic receivers that are called Air triggers and these can be configured for certain area tapping, for example, shooting while playing the games. This changes the experience of gaming for anyone, and while you tap on those areas, there is a haptic vibration feedback as well. The level of sensitivity for tapping can also be changed, and the squeezing can also work outside of the games as shortcuts for certain functions.

While the ROG phone comes with Android Oreo-based ROG UI, there is an X Mode that can be activated whenever you play games. This mode helps in a better gaming performance, helps free up background RAM and dedicate the RAM to games, and it also helps in a better efficiency of the AeroActive cooler accessory. The Game Center can help adjust the CPU frequency that you want to have for particular games, and the same game center would show all the current stats of CPU, GPU, temperature, and if the accessories are connected, you can adjust the fan speed from the Game Center. There is another section called Game Genie that lets you set and adjust the Air Triggers, Key Mapping, and from there, you can record and stream the games being played.

The ROG phone has a 4000 mAh battery and since there are two USB Type-C ports in the phone, the bottom one supports QC 3.0 and the one on the side has QC 4.0 support, i.e. 30W charging at 10V/3A and the QC 4.0 charger is included in the box package itself. Charging with this adapter would help charge the phone from 0 to 60% in 30 minutes, and a full charge can be done in an hour.

The device has a Dual front-facing stereo speakers with NXP 9874 amplifiers, 7.1 channel surround sound powered by DTS X Ultra, and the Qualcomm aptX support for Bluetooth wireless audio. The box package is going to include ZenEar Pro Headphones.

For the connectivity, the ROG Phone comes with dual SIM slot with both the slots supports 4G SIM cards, and there is a dual-band Wi-Fi 802.11a/b/g/n/ac, Bluetooth 5.0, Wi-Fi Direct, and NFC.

The box package of the device has the AeroActive Cooler accessory that sits across the center of the phone and it has the Aura lighting support, a USB Type-C port, and the headphone jack.

The phone is launched at the price of Rs. 69999. Check out the list of ASUS ROG Phone accessories and their prices.

Accessories for ROG Phone - List, Features and Price in India