InFocus, the brand from U.S. that has been regularly launching smartphones mainly in the budget range in India, has just launched yet another smartphone but this time, with a point that should challenge several top phones in its range, by running the latest Android Marshmallow OS, for the price tag of just Rs. 4299. While it does become a point of talk because smartphones with 5x the price too aren’t getting an update on time, but is having the latest OS version enough for the InFocus Bingo 10 to sell?

Let’s take a quick look into the specs of the device – The InFocus Bingo 10, or the InFocus M415 comes with a 4.5-inch FWVGA display, a MediaTek quad-core processor (MT6580M), 1GB of RAM, and a camera combination of 5MP rear- and front-facing cameras, both assisted with an LED flash. This Dual SIM smartphone comes powered by a 2000 mAh battery.

The InFocus Bingo 10 carries, as usual with this company’s phones, a unique and light design that stands differently from the lot. The White + green combination that I reviewed, had a soft white back cover while the side frame that hugs from front and back is made of green plastic that has slanting lines all around.

The back cover is removable, and it gives access to the slots for two SIM cards and a MicroSD card. For inserting any one of them, you will need to pull out the 2000 mAh battery. The back has a speaker grill, the InFocus branding as well as the 5MP camera with LED flash. On the front, InFocus logo uses quite some space in the bottom and above the display are the 5MP camera and LED flash combination. You’d rarely see someone calling a phone of this size as uncomfortable, and this is no exception with the InFocus M10 in being comfortable in the hand. The display could’ve been sharper because the non-HD content was easily pixelated, but if you are okay with it and don’t give much importance to entertainment on smartphones, it is good to go with, and you rather need to put your focus on the color reproduction. The display was decent with color output but the brightness isn’t really enough to clearly make the content visible under the sunlight. Here comes one of the main USPs of the phone – Android Marshmallow OS. Almost like a stock ROM, but with a few elements changed and added, the InLife UI 2.0 is what gets layered over the Marshmallow OS, but in the end, it is the current latest OS version for Android. At this price point, you wouldn’t expect that, given how bad companies have been in pushing smartphone updates, and several of them are launching new smartphones with older OS versions.

Why is Marshmallow OS so important? for me, irrespective of the power of the phone, the latest OS usually comes free of any compatibility glitches, has all the security patches and of course, some newer features, for example, Doze feature to reduced battery usage during standby. Though in an entry-level price range, the Bingo 10 comes with some motion sensing gestures such as Turn over to reject call, Volume quiet on pickup, and Shake to next song. Although these aren’t something you might want to use, but it is good to see that the software isn’t too blank or basic when you are looking at a smartphone with a low price range.

Does the inclusion of a new OS do much with the performance? To be frank after trying it out for a few days, it is no different and is all dependent on the chipset. Here, the InFocus Bingo 10 is powered by MediaTek’s quad-core chipset, the MT6580M and along with that, 1GB of RAM. About 540MB of RAM is what is available to the user after a fresh boot, not very much though not any less if you are not a heavy multitasker. All the games that we played, most of them not being very heavy on the GPU (games like Subway Surfers 2) and most of them played without any lags or issues. Switching between apps from the multitasking carousel was at ease and smooth.

One of the brands that would instantly come to my mind for offering flash light for selfie cameras is InFocus. This isn’t the first time, thus it comes as no surprise that the Bingo 10 has a 5MP camera with LED flash on the front, just like the combination on the back of the device. And to be clear, the front-facing camera does a tad better job with the captures, because the rear camera did have some issues with exposure. 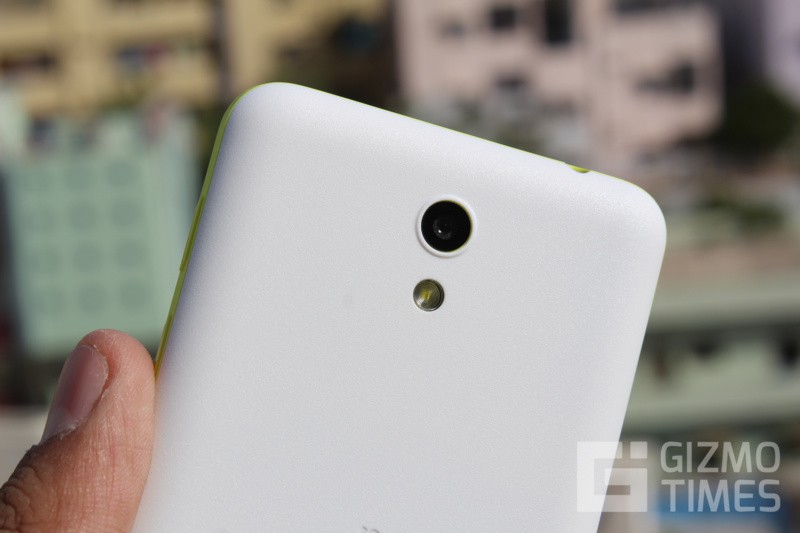 Nevertheless, if you are giving some time for the exposure to adjust by itself, you will find a decent capture in the end. The flash light doesn’t really offer a great help when there is appreciable light, but in overly dark conditions, you might find the right purpose of it.

Expecting 4G LTE connectivity for this price point is now not uncommon, because the competitors are offering that in smartphones at a price this low, but here, the InFocus Bingo 10 is limited to 3G, and the Dual SIM offers dual standby. Other connectivity options included are the standard set – Wi-Fi, Bluetooth, and GPS. Does the Doze feature really work in this phone, or has InFocus tweaked the interface to take advantage of it in some other way, I couldn’t figure that out, but the standby was actually very good. The battery drain was almost nil when the phone was idle overnight with no connectivity except for active SIM cards.

The battery life isn’t something to boast about, but at the same time, the 2000 mAh battery doesn’t run out of charge too soon, and can get you through to the end of the day on standard usage, with screen active for not more than three hours.

Final Verdict – Is the InFocus Bingo 10 worth it?

Let’s talk about the facts. This price range has seen a lot recently, even from the very brand that we are talking about here – InFocus. There has been a rush of smartphones, and each of them had something unique in them. The focus was mainly on connectivity, though, and less emphasis was laid on the performance on the UI.

The Bingo 10 with Android 6.0 Marshmallow out-of-the-box brings in those elements and features that a top-end device might have too, because those features are the ones limited to the newer OS. Some of the competitors include company’s own M260, Lenovo A2010, and the XOLO Era 4G.