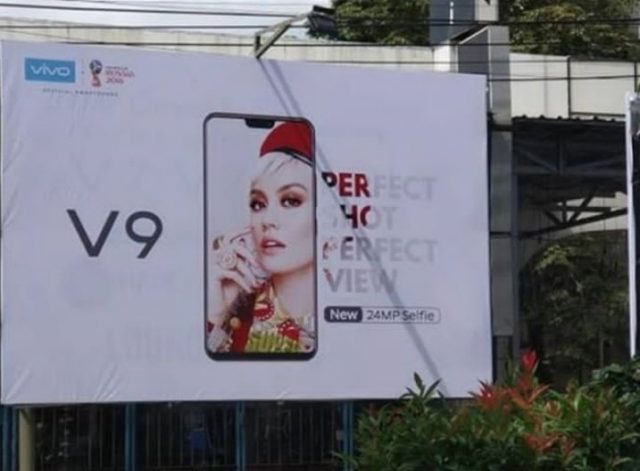 The top-notch on the Apple iPhone X is there to house the sensors required for the FaceID recognition to work. It now seems like even Android manufacturers are embracing the display notch just as a design statement. The Asus Zenfone 5 and Zenfone 5Z are two of the latest Smartphones to come with the “top-notch”, and if the recent leaked live images of the upcoming OnePlus 6 are to be believed, it will feature a display top-notch as well.

Chinese manufacturer Vivo will soon get on with its own top-notch Smartphone,  a billboard featured outside an Indonesian Vivo store shows the yet unreleased Vivo V9 Smartphone with a top-notch. The billboard advertisement has the picture of Indonesian actress/singer Agnez Mo in it who is the brand ambassador for the Vivo V-series devices in Indonesia.

Apart from the top-notch, the billboard ad shows off the slim bezels of the Smartphone and also reveals that the Vivo V9 will have a 24MP front-facing camera. Previous rumors also suggest that the device might be powered by the Qualcomm Snapdragon 660 chipset and come with a dual camera setup for the rear camera. The device is not primarily focused on performance and places all its bets on the front camera and the design. However, with the inclusion of a dual camera setup for the rear camera, the company has likely put efforts to improve the rear camera to accompany the already good front camera’s previously seen on Vivo smartphones.

As Vivo has already begun marketing the device (even though only in Indonesia), we expect the Vivo V9 launch to happen soon. The rumored release date for the device is set in March but it is still unconfirmed. There are also rumors that Vivo might take this as an opportunity to launch their Vivo Apex concept phone in the same event.