The ZenBook 14 series has received plenty of upgrades in the recent past and this upgrade comes with Screen Pad 2.0. The laptop still retains the much loved exquisite design, compact form factor, and the super-fast keyboard while updating the hardware and adding a touch screen on the trackpad. The laptop is majorly based on the previous generation ZenBook 14 UX433 but has minor upgrades, mainly in the GPU department. The ScreenPad technology has now been introduced in the VivoBook S and the ZenBook line this year, this was limited to the ZenBook Pro line till recent times.

The laptop itself isn’t very different from the previous model, but we take a closer look to gather our impressions on the ZenBook 14. The Asus ZenBook 14 comes with the Intel Whiskey lake Core i7 8th gen CPU and has the Nvidia MX250 GPU with 2GB DDR5 memory along with the included Intel UHD 620 graphics. The display is a 14” inch display with a glossy finish and FullHD resolution. The RAM on our review unit was 16GB and the internal storage was provided by a 1TB M.2 NVMe SSD. The IO configuration includes 1x USB-A 3.1, 1x USB-A 2.0, 1x USB-C 3.1 gen2, HDMI, microSD card-reader, mic/headphone port. The connectivity options include Wireless AC Dual-Band Wi-Fi and Bluetooth 5.0. The device also has a 5.65-inch ScreenPad, IR camera for Windows Hello and near-field microphone.

As we’ve seen in the past, the ZenBook 14 comes in various configurations with Core i5 and i7 processors, with and without the MX250 GPU. The 2019 ZenBook 14 is very identical to the previous generation ZenBook. The most significant difference is the inclusion of the ScreenPad which is much larger than the older touchpad and takes up more of the palm rest without actually interfering with the usage. The device is also now only available in the Royal Blue variant which looks pretty good but attracts smudges and fingerprints at the same time. The device also now comes with a redesigned air intake vents that optimize the airflow and is no longer limited to the side intakes as we’ve seen on the previous models. 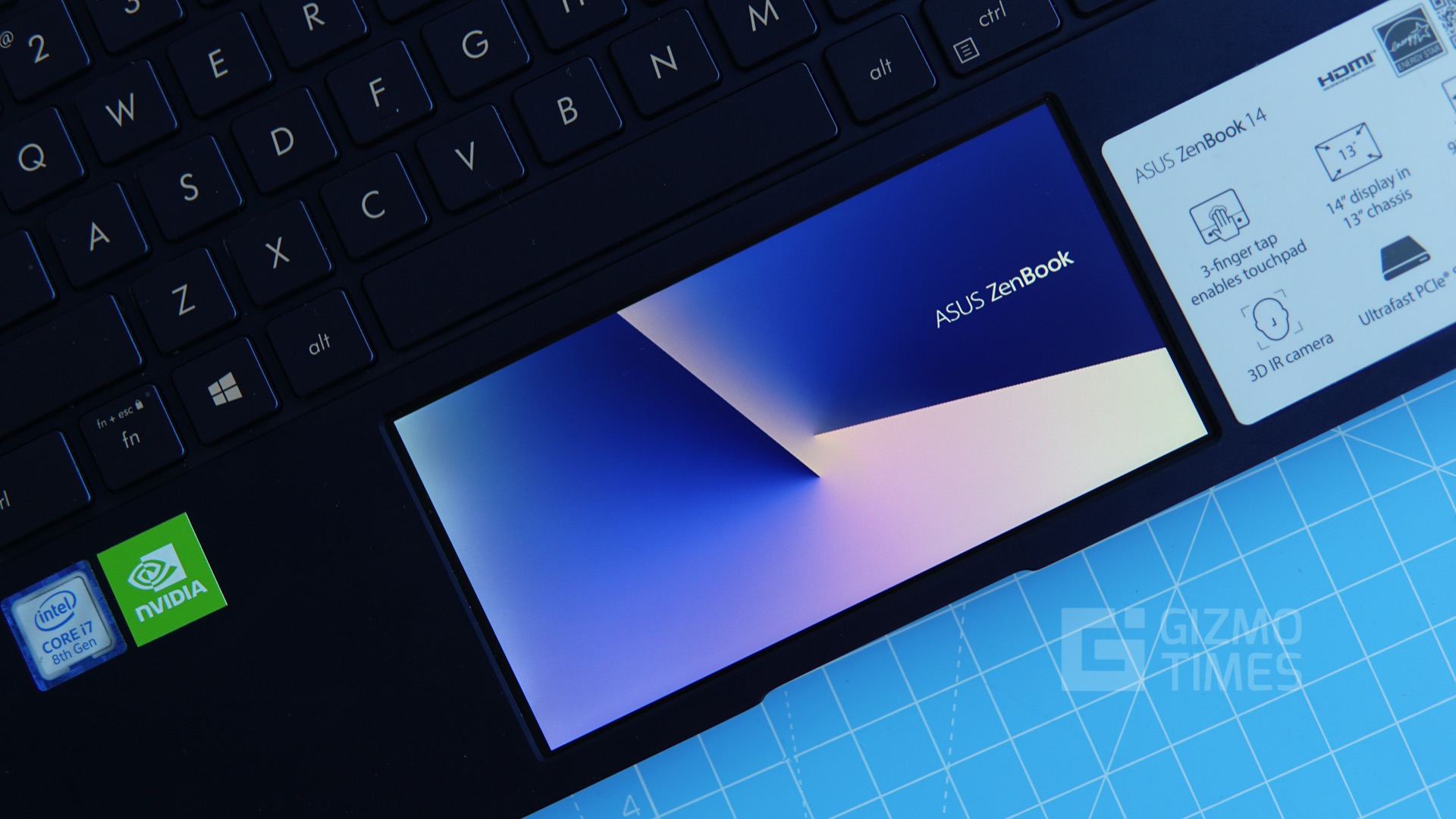 The ZenBook 14 is already built on one of the nicest designs and looks beautiful, but has a little flex in the keyboard area and around the lid cover near the Asus Logo. The compact form factor still remains the major selling point for the Asus ZenBook 14, the device comes with very tiny bezels around on the screen and has a very tiny chin with rest of it tucked away near the ergo lift hinge. The mechanism is strong and gives a sturdy feel while operating with a single hand as well, the display leans back to about 145-degrees which is a little limiting for a ultraportable laptop.

The ZenBook UX434 comes with a 14-inch display with protective glass on top. The panel is pretty good and has a peak brightness of over 300 nits, while it isn’t one of the brightest panels on the market, it still works in most conditions. The display has about 97% coverage of the sRGB color gamut and about 75% of AdobeRGB. The calibration was average and there is scope for improvement, it might be better to manually calibrate the display if possible for a better overall experience. The colors sometimes were oversaturated and the contrast was decent.

We got to review the heavily specced variant of the Asus ZenBook 14 and the performance was more than one could ask for from an ultrabook. The device is powered by the Intel i7-8665U processor based on Whiskey Lake, the graphics are handled by the dedicated Nvidia MX250 and the integrated Intel UHD 620 chipset. The laptop came with 16GB of RAM and 1TB NVMe SSD. The Asus ZenBook 14 handles all the daily chores without breaking a sweat and runs cools. We put the device through intensive use, building applications on Android Studio and using React Native, the laptop was quick to build and had no bottlenecks. Heavy usage in terms of CPU load was easily handled by the device and the performance of the Asus ZenBook 14 was up to the mark with most other ultrabooks. The GPU performance was decent for an ultrabook but cannot be used for intensive tasks. We used Photoshop CC, Blender, and Adobe After Effects, while the Photoshop and Blender worked fine on the ZenBook, Adobe After Effects did show noticeable lag and delay while scrubbing through the frames. The render times on the software were also super slow making it less than ideal for that usage. We also ran Cinebench tests which simulate 100% load on the cores, the CPU temperatures and performance was very consistent which is generally uncommon on portable devices. The temperature stuck at around 72-degrees Celsius and gave about 540 scores on the benchmark. The Geekbench test returned a score of 5223 on single-core and 16075 on multi-core. The 3D Mark returned a score of 2773 for Fire Strike which is pretty good.

Both, the CPU and GPU scores were above average for the form factor, the CPU performance does drop a little on longer usages but is still above average for the size. We tried out Rise of Tomb Raider on the device and it returned 32PFS on Low preset, while the frame rate is pretty low, we didn’t have higher expectations from the MX250 graphics card and it was satisfactory.

The Asus ZenBook 14 retains the keyboard from the previous generation, this is a pretty good thing as we really liked the keyboard on the older ZenBook. The layout is standard from what we’ve seen on most Asus ZenBook or Vivobook laptops. The keys are softly finished and of full size, they have the right spacing to make it comfortable and easy to type with. The power button is to the right top corner and requires slightly more power than the other buttons, the function keys are to the top of the keyboard and are easily accessible. The keyboard offers 1.4mm of travel which is fairly short a stroke but is very easy to actuate. The keyboard itself is pretty good but offers a little flex in the main deck and requires a firm press sometimes. We tried out the keyboard with multiple people and the overall sentiment was pretty positive and most people ended up liking it. The keyboard is also very quiet and also has White backlit on the blue caps making them visible in most conditions. The brightness on the backlight can be adjusted, however, in certain angles, the light does creep out of the keys and looks uneven. Activating the ScreenPad adds extra functionality but takes a toll on the battery life, the ScreenPad works as a secondary screen in Windows and can be used for literally anything. We tried using it with Spotify, Chrome, Word, Powerpoint, and Netflix which all worked great. It was very handy to enjoy music without quick access to the playlists, while it wasn’t very practical, we also binged on some Netflix shows in the Trackpad while trying to be a little more productive on the main screen. The most useful was, however, in the Powerpoint application while projecting to another HDMI display, it was easy to zoom out on the trackpad and see the upcoming slides before manually jumping to them.

The ZenBook 14 comes with a 50Wh battery just like the previous year models, this isn’t the biggest battery we’ve seen on 14-inch laptops, however, Asus implements it very efficiently as a result, the battery life does not disappoint. With the brightness set to 40% and the ScreenPad turned off we were able to use the device for about 7 to 8 hours while editing text and other basic tasks, about 8 to 9 hours while watching a 1080P video on YouTube and Netflix and about an hour and a half while playing games on the device.

Turning on the ScreenPad does take a toll on the battery life and depending on the settings and usage might cause as much as 30% decrease in battery life, it is recommended to keep the ScreenPad off while using the laptop unplugged. The device comes with a generic barrel plug charger that outputs 65W power, there is no quick charge functionality, despite having a USB Type-C port for a while now, it still doesn’t support USB Type-C charging. The ZenBook 14 is one of the post popular ultrabooks in the market right now, the updated ZenBook is mostly the same laptop with minor upgrades. Just like the previous model, the compact form factor, aesthetics and the amazing keyboard are still retained. The gaming experience was mainly hindered due to the thermal implementation. The lack of Thunderbolt 3 was pretty disappointing given that the ZenBook 14 is a premium ultrabook. The ZenBook 14 is priced very well across the variants and offers very good value for money.

Honor 20i Review - Capable, yet not the first choice