Samsung has officially launched the Galaxy Note7 phablet, following a series of leaks that almost mentioned about every important aspect of the device. The Note7 has a water-resistant design with the IP68 certification that would keep the spills and splashes away, and this is a good change from the Note5, just like how things changed from Galaxy S6 to S7.

The device has a 5.7-inch Quad HD Super AMOLED display (2560 x 1440 pixels resolution) and it comes with the Corning Gorilla Glass 5 protection. The Galaxy Note7 is powered by octa-core Exynos 8890 processor or a quad-core Snapdragon 820 based on the market where it is being sold. 4GB of RAM is what we see on the device, unlike the 6GB RAM speculated, given how some flagships already have it. There’s 64GB internal storage provided in the device and a MicroSD card slot is offered for the storage expansion, with the support for up to 256GB card. 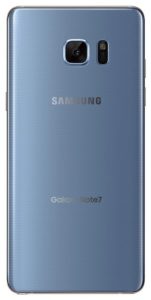 The Galaxy Note 7 runs Android 6.0.1 Marshmallow OS with the TouchWiz UI layered over it. For the camera combination, there is a 12-megapixel ‘Dual Pixel’ rear camera with the F/1.7 aperture and Optical image stabilization, Phase detection autofocus, and the 1/2.6″ sensor size allows for more light to enter and thus, low light captures are naturally brighter. The rear camera supports 4K video recording and slow-motion video recording as well. On the front, the phone has a 5-megapixel camera with the F/1.7 aperture.

The S Pen just got better with the addition of functionality. The Screen off memo feature that was already present in the Note 5 now allows for pinning the notes to the Always On display. Translation of the content is another feature. When the S Pen hovers over the foreign text, the text is translated to user’s preferred language.

Samsung has finally got into the USB Type-C list, with the Galaxy Note7 having a USB Type-C 1.0 reversible connector supporting fast charging for the 3500 mAh battery. The device also supports fast wireless charging. The important sensors that are worth a mention include the Iris scanner and fingerprint sensor, which are for the security. Also, the Galaxy Note7 is KNOX enabled for the additional content security. The Iris scanner helps not just in unlocking the screen but also in authorizing payments.

The phone will be available from August 19th in Blue Coral, Gold Platinum, Silver Titanium and Black Onyx color options. In the U.S., you’ll get your choice of a Gear Fit2 or a 256GB microSD card along with the device.