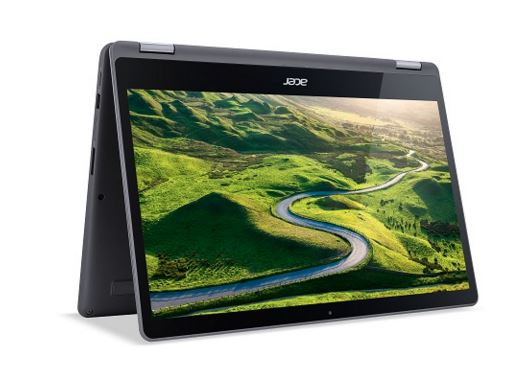 The notebook measures just 14.4mm in thickness and weighs just 1,4kgs. It comes with USB Type-C port along with two USB 3.0 ports, HDMI and SD card slot. The device comes with a 54 W 3-cell Li-ion battery which gives 13 hours of battery life. Acer has also launched the Chromebook 14 for Work with military standard protection and spill proof keyboard. The Aspire R 15 is a convertible laptop which comes with a metal top cover with a hairline-brushed finish, the bottom cover is made of 40% glass fiber and silver particles. The laptop is powered by 6th Generation Intel Core processors with up to 12GB DDR4 memory and up to NVIDIA GeForce 940MX graphics. The convertbile laptop comes with Acer ExoAmp Antenna technology to improve connectivity and give stable wireless experience. the convertible runs on Windows 10 Os with Cortana, Skype etc pre-installed.

Similar to the aspire S 13 the Aspire R 15 comes with Acer TrueHarmony and Dolby Audio providing an immersive experience while automatically reversing audio channels according to the orientation and mode of the device which is quite useful for a convertible laptop.