The dual-camera magic has been there for a while in the market, but we’ve seen a majority of the smartphones having that combination on the back and not on the front. It is the rear cameras that people use to take photos, mostly, right? That may not be the case with everyone, and thus, brands like OPPO and Vivo had come up with the dual-lens camera combination on the front. ASUS now joins the bandwagon with the ZenFone 4 Selfie that comes with two cameras on the front, one with the regular selfie shooter and the other one, for group selfies.

The ZenFone 4 Selfie has not a bad list of specs to define itself, and while the front-facing camera combination of the phone is one of the highlights, let’s check out if the device is worth what the company is asking for it – Rs. 14999. Also, just to note, there are two other models in the lineup, one with a single front-facing camera, though having the same name, and the other one is the ZenFone 4 Selfie Pro that has a lot of differences, both externally and internally.

The unit we were provided with is the dual-camera version of the Zenfone 4 Selfie series which is priced at Rs.14,999. Don’t get confused with Zenfone 4 Selfie wherever I have mentioned it.

It is already known that Asus has made a lot of phones with the similar design when they have entered the smartphone market. They are now coming up with some cool designs for their smartphones. The Zenfone 4 Selfie has got one such kind of a cool design, I would say. It feels premium, smooth and pretty comfortable while holding, all thanks to the aluminum finishing, curvy edges, and the 2.5D curved display.

Weighing just 144g which is well distributed uniformly all along the device, for a 5.5-inch phone, this is very less to weigh with a 3000 mAh battery. I mean, how often do you see a phone of 5.5-inch display weighing less than 150gms? The power button and the volume rockers on the side of the phone give a good tactile feedback when pressed. On the other side is the SIM card tray which has two Nano SIM card slots along with a dedicated MicroSD card slot. The bottom has a Micro USB port along with two grills, one being the speaker and the other, a mic. Whereas, on the top, we have a 3.5mm headphone jack alongside with the secondary noise cancellation mic.

Up above the display is the second speaker for the calls along with the 20MP and 8MP wide-angle camera on either side of this speaker. There’s also an LED flashlight which was bright enough to capture those selfies in the dark pretty well, I’d say. However, check out for the camera samples.

The things I liked in the design are the textured power button which feels so good to touch and the rear camera’s lens has a textured design around which looks premium. Overall, I would say that Asus is making some of the coolest designed smartphones currently in which I’d list this on the top. I mean, it just looks and feels so premium!

On the front is a 720p IPS LCD display which has a good color reproduction that you can expect from this display. The display has good brightness levels which are good enough for you to use the device outdoors but under direct sunlight, it’s not up to the mark. Other than that, the colors are mostly on the cooler side and the display doesn’t seem to be the one you see. 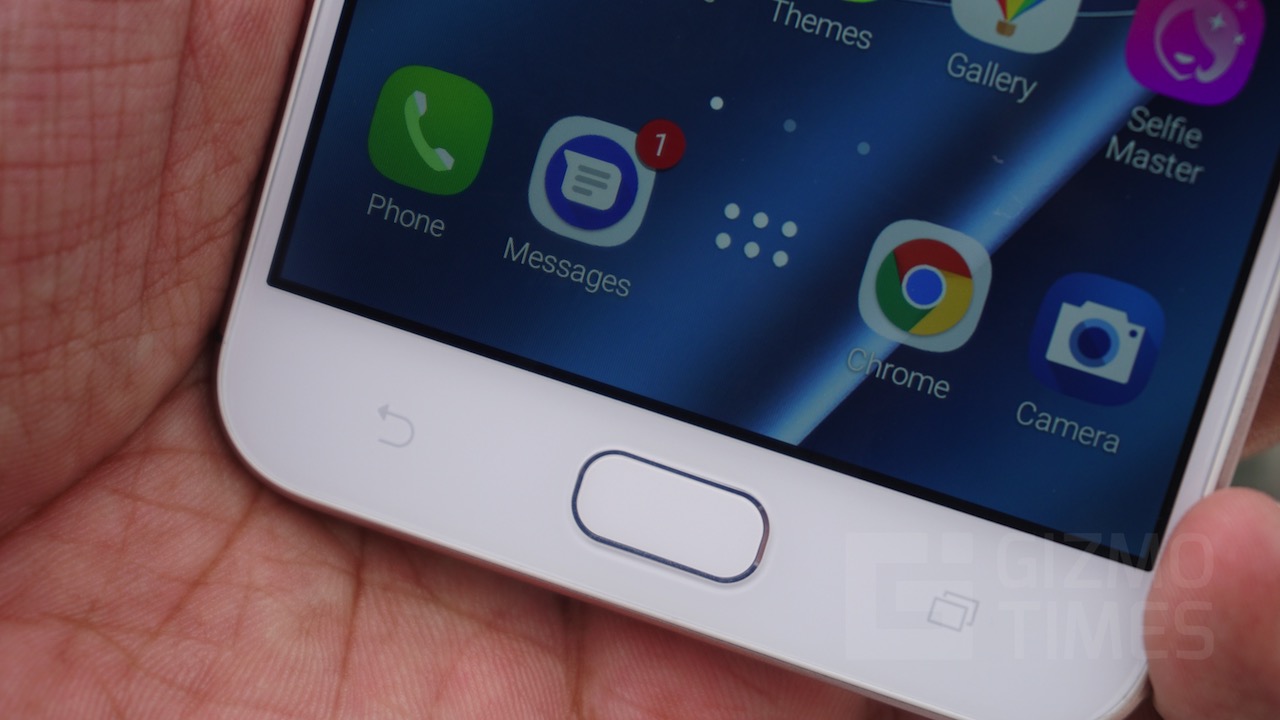 I have noticed that Asus has removed the display’s color settings with the ZenUI 4 which I still don’t understand why. Maybe a lot of the users were messing up with the colors and complaining back. But they have still put on that blue-light filter which covers the screen with a yellow tint to protect your eyes while reading or using the device in the dark.

Overall, the display is the best ones to see on a device in this price segment. But quite disappointed with the 720p display, you have to compromise on a few things to get the pro in a few things. The UI on the Zenfone 4 Selfie is the Asus’s own home-brewed ZenUI running on Android 7.1.1. It’s also got the latest security patch level update of August 1, 2017. Asus has not yet told whether the device would be getting the Android ‘O’ or not. So, other than that, the ZenUI as loved by many others is mostly known for its features and customizations. Asus, on this phone, has put down many of their pre-installed apps which is a good move. I usually don’t like the ZenUI much but on this device, with the ZenUI 4, I was taken by a surprise to have such a smooth experience.  The usual bloatware you find on this phone is Asus Weather, Web Storage, File manager, and other basic apps. Coming into performance, the device has the Snapdragon 430 under the hood, quite old eh? But seeing the better side of it, it’s power efficient and a good performer. Even with the heavy games that we’ve played, the graphics at medium level were good enough to not lag with the phone not heating up much.

Now into multi-tasking, I have been using the phone with several apps running in the background and switching between them all day long, and believe me, it had survived without any noticeable lag, all thanks to the 4GB RAM. The split-screen mode in the ZenUI is no older feature and works like a charm on this phone. You can activate the split-screen mode from the dragging down the quick toggles from the current app you are in. I have expected the device to heat up while extreme gaming but no, it doesn’t go above 40° C, credit to the Snapdragon 430 chipset. Finally, the performance is mediocre due to the let down old chipset. But still, I must say that it’s great for the price you are paying.

Finally, the part where it excels, the cameras on the Zenfones if you don’t know, are always a bliss. Keeping the sensors apart, Asus has the Pixelmaster camera app which has many customization features, modes, and various filters. So let’s jump right into the cameras. Firstly talking about the rear camera and putting the pro one at suspense, it is a 16MP f/2.2 sensor with EIS, LED Flash, and PDAF. The rear camera has features like Low Light, HDR, manual mode, selfie panorama, GIF animation, time lapse, and various other filters.

The performance of this rear camera, you should see the samples to believe it. It does the job perfectly fine with producing vivid and natural colors in the photos by not oversaturating them. The above features mentioned works like a charm and this is all you can ask from a smartphone in this price segment. Apart from them, it also has a portrait mode which blurs the background while taking the photo of a person, similar to that on the iPhone. But it looks more artificial rather than natural. So, below are a few samples for you. As the name itself suggests, the phone is mostly about the selfie camera that it has been equipped with. It has got a dual-lens selfie camera, the 20MP primary one for the normal selfies and 8MP wide-angle camera for group selfies. The 20MP sensor has a f/2.0 with 5P lens while the 8MP one has f/2.4 with 6P lens. The front cameras also have a LED flashlight which is not overpowered but gives you the natural look when a snap is taken.

The 20MP primary selfie camera is the best among all the other selfie-centric phones is what I feel. The snaps taken with this camera come out pretty cool with all the little detail and perfect saturation. Asus’s Pixelmaster camera app has many filters and beautification edits that you can do. The best part is that Asus has decided to put up the Live real-time beautification on this phone as well. So now, you can go live on your social handles with beautifications turned on. What else, you’ll win that selfie game!

The 8MP 120-degree wide-angle selfie camera will capture your troop whenever you meet your buddies. The photos I’d say come out pretty good in terms of capturing everyone but not well in detail. This is what you can expect from an 8MP, at least.

Boosting down to the battery, the Zenfone 4 Selfie is powered by a 3000 mAh non-removable battery. For a moderate and aggressive user like me, the phone kept on running throughout a day without any hassle. How I consumed the battery for a day’s usage is, keeping the 4G data connection always turned on, never cleared the background running apps, some gaming for a while, watched YouTube, and kept switching between my social media apps. Mind that it was all done in adaptive brightness indoors.

Coming to the technical terms of that particular usage, I got a SoT of 4h30min with 7% battery left. However, you might get a different SoT based on your usage. In the end, this is all you can expect from a 3000 mAh battery combined with a 5.5-inch 720p display.

The Zenfone 4 Selfie supports all the basic connectivities such as 4G VoLTE, Bluetooth v4.1, and Wi-Fi 802.11 b/g/n. The SIM tray on this phone is capable of taking up two Nano SIMs along with a MicroSD card (dedicated slot). The data connectivity works fine and connects fastly just when you need it. The call quality is well with no disturbances and noise cancellation works just fine.

The bottom has two grills from which the only one out of them is the speaker. The other one is the mic that used while taking calls and recording voice. The speaker again is not loud enough to be heard all over in a large room. However, the audio output from the 3.5mm audio jack is pretty enough if you’re gonna go solo. The Zenfone 4 Selfie falls into the pro-selfie-camera category if we look all the other smartphones today. The cameras, especially the front one has eye-catchy performance. And, this phone doesn’t just give you the best selfies, but also decent performance, and enough battery to keep you running all day.

When it comes to ‘Should I buy it or not?’, it all depends on your priorities when you are buying a smartphone. If you are an extreme selfie lover and looking for a phone to take those beautiful selfies of yours alongside with decent performance, this is a phone you can look for in the price range of Rs. 15000. You can also take a look at other selfie-centric phones in this price segment such as Vivo V5s and Oppo F3.