Motorola Moto M specification and price leaked ahead of launch Motorola Moto M (XT1662) is an upcoming mid-range Android smartphone. A Chinese publication has just revealed the purported specs and pricing of the handset. According to the report, Moto M may come with a MediaTek chipset, 5.5-inch display, up to 4 GB RAM and will cost 1999 Yuan (Rs. 19,990 or $299 USD approx.). 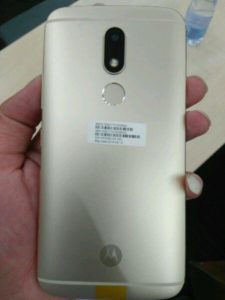 We already know a handy amount of details regarding the future smartphone from various rumours and speculations. The Moto M will sport a metal exterior presumably made of aluminium. Upfront there will be a 5.5-inch Full HD (1080 x 1920) display. Looking at a leaked press image, we suspect that this will be a 2.5D curved screen with a negligible bezel. At the time of launch, the Motorola handset is expected to run Android 6.0.1 Marshmallow while the Android 7 Nougat update shall arrive shortly.

According to a previously divulged benchmark listing, the Moto M was predicted to come with the MT6755 or MediaTek Helio P10 SoC. Now, new sources claim that the Lenovo-owned company might have upgraded the processor to the latest MediaTek Helio P15. The newer processor comes with a higher clock speed and offers an overall 10 percent performance improvement. If this turns out to be true, then the Moto M should be the first smartphone to get powered by the Helio P15 chipset.

The new processor consists of eight ARM Cortex A53 cores clocked at a maximum frequency of 2.2 GHz. The graphics are managed by a dual-core Mali T860 GPU running at 800 MHz. Speaking of memory, the Motorola Moto M will sport up to 4 GB of RAM along with 32 GB or 64 GB of internal storage. The upcoming handset may support micro SD cards.

Moving on to the camera, a 16 MP autofocus unit will sit at the back of the Moto M. This will be assisted by a dual tone LED flash. The handset will sport an 8 MP selfie shooter. A circular shaped fingerprint scanner will sit just below the primary camera module at the back of the phone. Speaking of battery, a 3000mAh non-removable battery will fuel up the forthcoming device. So far Motorola hasn’t mentioned any specific release date of the Moto M. However, with the enormous amount of leaks surfacing recently, we can be confident that the launch is pretty imminent. A third party phone accessory maker named Skinomi has already listed its products for the Moto M, giving us a clear look at the front of the handset. However, all of these information are purely unofficial at the moment and should not be taken as the final one.