Acer has announced their first convertible laptop or Chromebook, the Chromebook R11. It comes with a 360 degree hinge design allowing it to flip completely to convert it into a tablet device. It comes with three positions called easel, flat or interim position giving the user freedom to use the Chromebook as desired.

Acer already is a big player in the Chromebook segment with more than 35 percent market share, with the number of Chromebook sales increasing the company is looking to capture as many students by implementing some great designs and features in their Chromebooks.

The Acer Chromebook R11 comes with a 11.6 inch display which is touch enabled, having resolution of 1366 x 768 pixels, it comes with 10-point touch which supports gestures like tap, swipe and pinch to zoom. It is powered by a Intel Celeron N3050 or N3150 chipset and supported by 4GB of RAM and 16GB or 32GB of internal memory.

The Chromebook R11 comes with a aluminum back having only Silver color, which gives it a premium look and feel and has a minimalistic design to it. The Chrome book can be used in four forms, as a laptop, tablet, display and tent. The device weighs 2.76 pounds and is sleek and easy to handle for a chromebook. 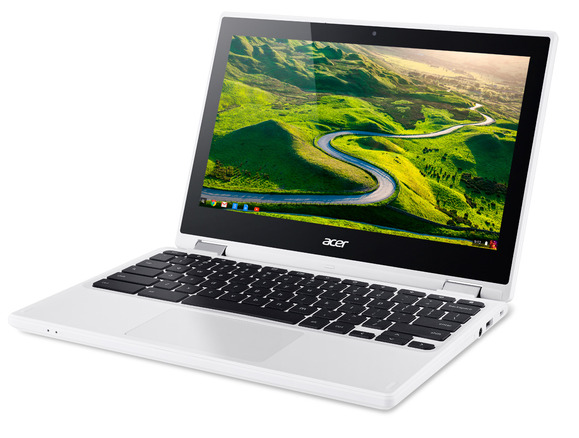 Acer has many models in the Chromebook series like the Chromebook 11 series with the 11-inch display models available in three variants and the 13-inch variants available in six variants based on specifications and pricing. The cheapest one being priced at $179.99 in the 11-inch display variant and the costliest model priced at $349.99 in the 13-inch variant.

The pricing of the Chromebook R11 is not yet revealed by Acer, but we expect the chromebook to be somewhere around the $200 mark. The device will be available for sale in North America in October and will be available in November in Europe. Chromebooks are becoming popular with extensive use in colleges, offices and for personal use as well, which are easy to carry around and simple to use along with being budget friendly.