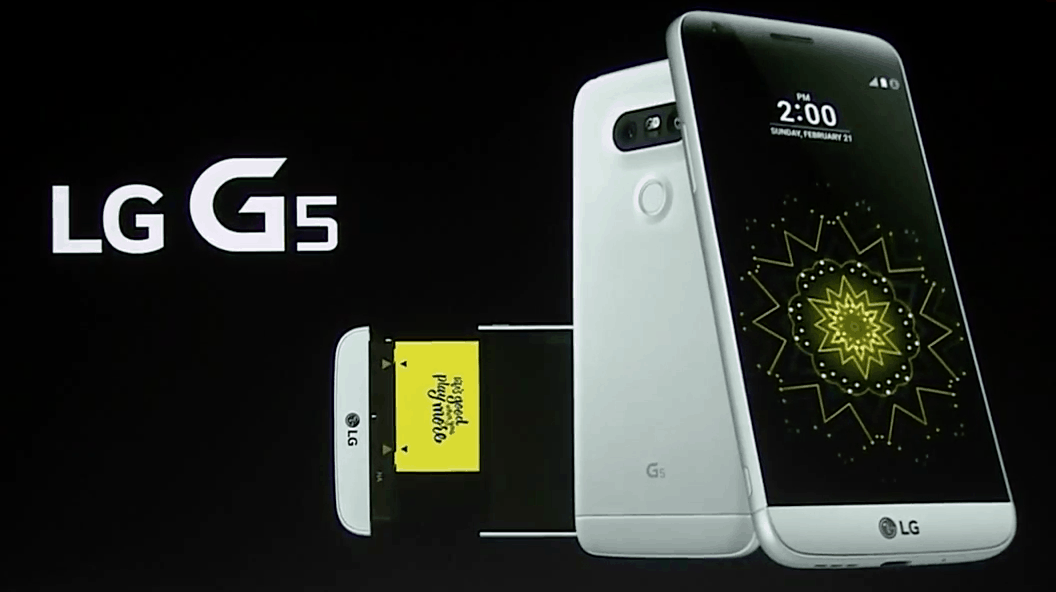 LG has launched their latest flagship device the G5 at Play event at MWC 2016 which is the successor to the LG G4 which was a great device in all aspects, the design and camera. The LG G5 is revamped in terms of design and also sports a Fingerprint sensor at the back. The trademark rear volume rockers and Home/Power button have been placed on the sides in a traditional manner. The company has announced two other smartphones along with the LG G5, the LG X Cam and LG X Screen which.

The LG G5 comes with a metal body, it is powered by the latest Snapdragon 820 SoC by Qualcomm which was already confirmed by Qualcomm through twitter. It is said to be built using 14nm fabrication process which helps in keeping the device cooler and also uses less power, both of which were problems seen in Snapdragon 810. The LG G5 comes with 4GB of RAM and Storage space of 64GB.

The LG G5 will be sporting a 5.3-inch display which is slightly bigger than its predecessors the LG G4 and it comes with an always On display (only a part of the display is turned on) which uses only 0.8% of the battery power every hours. It is similar to the one on LG V10 located on the top of the display and it comes with resolution of 1040×160 pixels.  It is a pretty useful feature which was seen in the V10. The G5 will be coming with an always On display which shows Time, date, and other notifications. The LG G5 sports a 20MP rear camera with Sony Sensors and is an improvement from the G4 in terms of specs and we have to see it in action to see if it surpasses the performance of the G4. It comes with Dual Camera Lens on the back with the LED flash in between the two lens. The front camera is an 8MP front facing camera. The Fingerprint sensor is located below the camera module on the back of the device. LG has partnered with Bang & Olufsen the premium audio firm which is said to give high-quality audio experience in the G5.

LG has announced two modules called the CAM Plus and Hi-Fi Plus with B&O Play. The CAM Plus should be attached via the battery slot and it provides hardware buttons like shutter release, zoom along with flash toggle, it comes with 1,200mAh battery of its own.

The second module is the hi-Fi Plus which is an Hi-Fi audio player and can be plugged into LG G5 to support music playback and also acts as a standalone device. It comes with high-end Digital audio chip which can connect to any smartphone or PC.

The smartphone comes with a modular concept design called the “Magic slot” at the bottom of the device which incorporates the battery, it can be removed by pulling it downwards. The hardware components will be controlled with an App called LG Friends manager. The other modules which LG has showcased are the battery grip or the LG Cam Plus for photography and DAC or digital audio chip for improved sound quality.