Insights and Q&A about Bitcoin and Cryptocurrency [Gambit 2017 Conference]

GAMBIT was one of the first conferences about Bitcoin and while discussions about domains and gaming were on as well, the focus was majorly on Cryptocurrency. The awareness and education around Cryptocurrency in India is too less and that is why for anyone who is looking to invest is confused at the highest level. While some of the sessions at the GAMBIT conference were enlightening for the newer people in the industry, we have some questions summed up based on what the speakers advised and the questions that people asked these speakers.

The conference was also attended by Mr. Jayesh Ranjan, who happened to be the Chief Guest, and is the Principal Secretary, IT, Govt. of Telangana.

Why is the Bitcoin price going up?

For now, the major reason is the Demand and Supply. There is a limited availability of Bitcoins, and while newer people who want to invest in it are ready to buy them, the holders don’t want to sell them. This increases the price of Bitcoins. Such is the case for other coins as well, but then, the price also jumps up and down based on how big investments come in at once, sometimes.

I have my Bitcoins in a particular wallet and I was transferring it to a better one. The first website where I had my Bitcoins went down, and my transfer got stuck for half a day. Is this how decentralized currency going to be? You feel helpless when such things happen.

The thing right now about Bitcoins or the entire Cryptocurrency market is that it is in a nascent stage. Not just in India, but everywhere around the world. There are websites that work as exchanges as well as wallets, and there are chances that these websites can go down at any time, just like any website on the Internet would go, and it should be on the server side that it happens. As far as you have your Private Key for your Crypto coins, there’s nothing happening to it and it will be safe, even if the holding exchange goes down.

It is quite understandable that you get frustrated that your transfer got delayed, but that’s what happens when either you choose a wrong wallet to hold your Bitcoins, or when there is a real issue happening on the background. That’s a reason why you have to also learn about the best places to store and exchange your Cryptocurrency.

I want to store my Bitcoins in a very secure place. Which is the best option?

For a long-time investor, it is better to use a Physical wallet such as Ledger Nano S, or Trezor. While some online wallets like even Coinbase are secure enough, there can be nothing better than the cold storage through physical wallets.

Legalizing or regularizing Bitcoin / Cryptocurrency in India. What’s the progress on it? 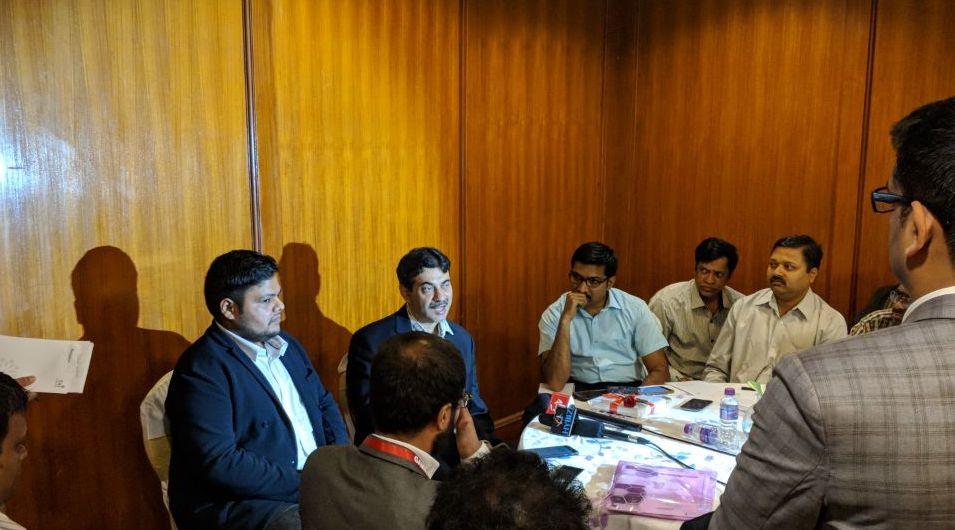 Mr. Jayesh Ranjan, Principal Secretary, IT, Govt. of Telangana answers this by saying that Indian govt. is already welcoming Blockchain technology but they are not keen to welcome Bitcoin or the other cryptocurrency, but they are still open to options and are analyzing before taking a step. He says we understand the technology is going to have a good future but we cannot just let things happen without the govt. getting involved with the cash inflow and outflow.

A very interesting question was asked about how someone can analyze the pump and dump of an Altcoin. When should I enter the scene?

Sainath Gupta from AnythingAI says that while he doesn’t enter the pump and dump scenarios, there are several groups on social networks where the speculations happen and people get signals. It is better to stay away from a pumping coin when you see a signal and miss it for some time. It would get dumped while the time you are entering it and it is better to see things with a long-term approach.

What about Altcoins? Bitcoin is at such a growth that I think it is always a doubt of whether to invest. But there are a lot of smaller Crypto coins that we can invest in, what about them?

There was no clear answer to this, though a list of some of the growing Altcoins was shared. With Altcoins, it is no different from Bitcoin because the latter has the advantage of being the early bird in the market. It can be the same fate with these Alt coins as well, and some of them worth checking out include the following:

Note: Based on our own research, we have a list of best Altcoins to invest on before 2017 ends. You may also check that if you are interested to invest in Altcoins.

What is ICO and how do one trust and invest in it?

ICO is Initial Coin Offering, an investment you make into a new project. It is similar to IPO (Initial Public Offering) where you invest in a company and hold some shares in it. The problem with ICO currently is that there are some MLM scams happening and that makes it hard for someone to trust in and invest in ICO. Here, the suggestion for anyone trying to invest is that you have to research on the ICO and see who are the founders of that particular ICO and whether they have a background of successful business in the past.