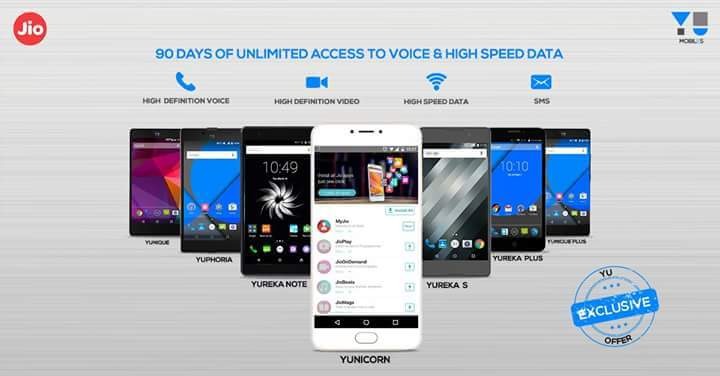 Alongside Micromax, it is YU, the company’s subsidiary brand whose 4G smartphone users can get the Reliance Jio 4G SIM cards for free at the Reliance Digital and Reliance DX stores.

It is pretty much the entire list of YU smartphone lineup there but the catch there is that the device needs to have 4G LTE, so the latest seven phones from YU are the only applicable ones to receive the Jio 4G SIM card with the Preview Offer.

The Preview Offer gives you the access to free calls, data, and SMS for a period of 90 days. Along with that, premium access to some of the Jio apps is given under this offer, and the apps include JioPlay, JioOnDemand, JioBeats, JioMags, JioXpressNews, JioDrive, JioSecurity and JioMoney. Although it is said to be 90 days, if the Jio service doesn’t get launched in the next 90 days, you can continue enjoying the free calls and data until its commercial launch.

How to generate offer code on YU phone to get Jio 4G SIM?

To generate the offer code or invite code that you have to show at the Reliance Digital or DX store, you need to download the MyJio app on your device. In this app, there will be an option to generate offer code to get the Jio SIM.

You will need to follow a few steps before you can finally generate the code and once that is generated, you can take a screenshot of it to show it at the store. Though, whenever you open the MyJio app after getting the code, you can just open the app to see the code available.

Here’s how to generate code for Jio SIM

To get the SIM, you will have to submit an ID proof, address proof, and a passport-size photograph.

In case you have an issue, do comment below and we will try to help you resolve that.

How to Open ZIP and RAR Files on Mac OS X or MacOS?